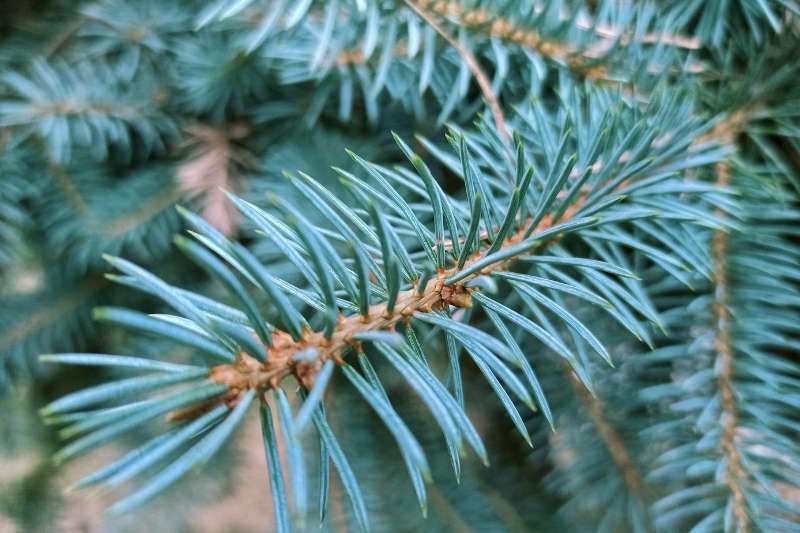 Ask Mr Burger – My Colorado Blue Spruce tree is all brown in the middle
and losing its needles; what is the problem?

This symptom can be caused by a disease known as “Needle Cast” in spruce trees.  Below is a good article on Stigmina And Rhizosphaera Needle Cast In Trees by Jackie Carroll

“Have you ever seen a tree, such as spruce, with healthy looking needles at the tips of the branches, but no needles at all as you look further down the branch? This is caused by needle cast disease.

What is Needle Cast Disease?

Needle cast diseases cause spruce trees to “cast off” their older needles and keep only the young needles at the tips of the branches. The tree becomes unattractive and may look as though it is dying, but don’t despair. Rhizosphaera and Stigmina, the two most common needle cast diseases of spruce trees, are treatable. You can have your tree looking lush and beautiful again within a few years by following a program of needle cast treatment.

These diseases primarily affect blue spruce. If you have seen trees affected by needle cast disease in the area, avoid planting this highly susceptible tree. Instead, consider planting Norway spruce, which is resistant. White spruce and other conifers, like pine and fir, are also susceptible.

The first step is to get a reliable diagnosis. Experts recommend that you send a few diseased needles to a diagnostic laboratory where they can run tests to identify the problem. If you feel comfortable trying to identify the disease at home, here’s what to look for:

Treat the tree by spraying with a fungicide twice in the spring and then once every four weeks during wet weather.  Alternate between sprays with different active ingredients. Copper and Chlorothalonil are two active ingredients that are proven effective against the diseases.

Keep in mind that these sprays are highly toxic to plants, animals and people. Follow the safety precautions on the label to the letter. Wear the recommended protective clothing, and read all instructions regarding mixing and applying the fungicide before you begin. Large trees are difficult to treat without help from a tree service.”

Burger Farm and Garden Center sells Daconil and Copper Fungicide which contain the active ingredients Copper and Chlorothalonil, as a treatment for Needle Cast.

← Ask Mr. Burger – I see little red spiders on our sidewalk; what are they and how do I get rid of them?
Ask Mr. Burger – Should I apply lime to my yard in the spring? →