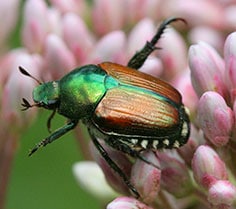 Here Comes the Sun: Summer Solstice & the garden pest of the week

It may have felt a little more like summer this week, and hopefully your lawn & garden are hitting their summer stride as well- because ready or not, it’s officially here!

What exactly does that mean? Here’s an informative and helpful article from our trusted Old Farmer’s Almanac about some history, significance, and clarifications between the meteorological and astronomical seasons and timelines.

Another handy little timeline from the Almanac for the remaining days in June:

Maybe follow this week’s calendar suggestions, and see how it turns out!

As we mentioned in last week’s news post, June is also Perennial Plant Month as well as Pollinator Month, and Pollinator Week is June 22-28, so be sure to take advantage of the timing, and get some more perennial pollinators like Agastache, Black Eyed Susan, Coneflower and Yarrow in your landscape this month.

Most of us gardeners will welcome the sights of beautiful pollinators and beneficial bugs, but what about the unsavory ones we’ve discussed in recent weeks- you know- the ones whose mission is to seek and destroy our hard work- like the Squash Vine Borer, the Japanese Beetle, or the mosquito & cabbage worms & loopers?

For some of you folks who may be new to the gardening game this season, or in the last couple of seasons, be sure to check out our previous posts here and here.

Next up in the gauntlet of garden pests is the Japanese Beetle, which show up in the summer, east of a line which runs from Cleveland down through Cincinnati. They also can be found in western parts of Ohio and beyond.

The beetle has copper wings, a metallic green head, and 5 white tufts of hair along each side of their abdomen.

Adults feed on more than 300 species of plants, but the C-shaped larvae will typically stick to turf grasses- chewing through the roots, killing the grass.

From the The University of Minnesota Extension office: (Full article can be found here, but below are photos & snippets of what we found most useful!)

Adult beetles will “skeletonize” the leaves by feeding on tissue between the major veins, leaving them looking like your grandmother’s lace tablecloth. The diseased leaves can turn brown and fall off. 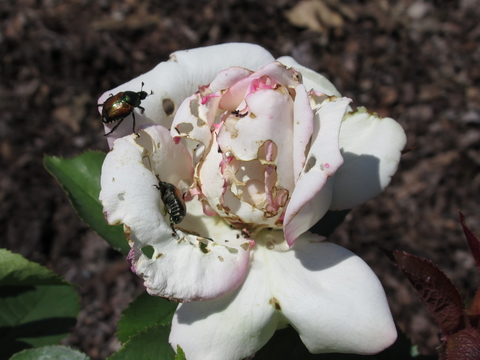 Damaged leaves attract more beetles so minimizing beetles on plants should mean fewer beetles will be attracted to them.

Japanese beetles feed for six to eight weeks so it is important to continue management until their numbers decrease. Once they are present in large numbers, managing them becomes more difficult.

Most feeding is finished by mid to late August.

Physically removing beetles can be a practical and effective management practice for smaller landscapes or a few plants, especially when only small numbers of Japanese beetles are present. Handpick or knock the beetles into a bucket of soapy water to kill them.

Check your plants daily and remove any beetles that you find to minimize feeding damage. Remember beetle-damaged leaves emit air-borne chemicals that attract more beetles. By physically removing them, you’ll reduce the number of new beetles attracted to your plants.

The best time to remove Japanese beetles is in the evening or in the morning when beetles on the plants are still cool and sluggish. However anytime that it can be done is still useful.

In some cases, it is possible to protect plants with fine netting to prevent beetle damage. However, do not cover plants in bloom that require pollination (i.e. fruits) as this will prevent pollinators from reaching them. Instead, handpick beetles until the plant is done blooming and starting to set fruit, then cover it.

Don’t use Japanese beetle traps. Hanging a trap in a home garden is not an effective way to protect plants. And they may attract more insects to your yard.

The traps attract beetles using synthetic female sex pheromone and a blend of chemicals with a strong floral odor. They were developed by researchers to monitor for the presence of Japanese beetles so that management strategies could be implemented.

While these traps can collect an impressive number of beetles, research at the University of Kentucky (in Lexington, about 100 miles away south of Cincinnati) has demonstrated that more beetles fly toward the traps than are caught. This usually results in more damage to nearby gardens and landscape plants than would have happened if no traps were present.

Although Japanese beetles feed on many different kinds of plants, there are some that they seldom damage. When choosing new plants for your landscape, consider using a less preferred plant.

So, while they may seem like a worthy adversary, there’s much to be done to combat them, and the damage they cause will not likely wipe out your entire harvest.

If you’d like to avoid physically removing them, we carry Natural Guard Spinosad Concentrate, 16 fl ounces for $21.99; Bonide- Captain Jack Deadbug, hose end applicator 32 fl. oz for $34.99 and Bonide-BT ready to use- 32 fl. oz for $15.99. Be sure to follow all manufacturer’s usage and application instructions and precautions.

Stay tuned for the next pest we tackle- the garden we save could be your own!

← Jumping in June for pollinator perennials
Cedar Apple Rust- what is it, how to treat it →