7 Types of Fir Christmas Trees to Deck the Halls

Putting up the tree is an exciting moment that signifies the start of the Christmas season. Many families have a tradition of using live trees in their homes — there’s something so special about the smell and ambiance of a live tree that a fake tree can’t compete with. 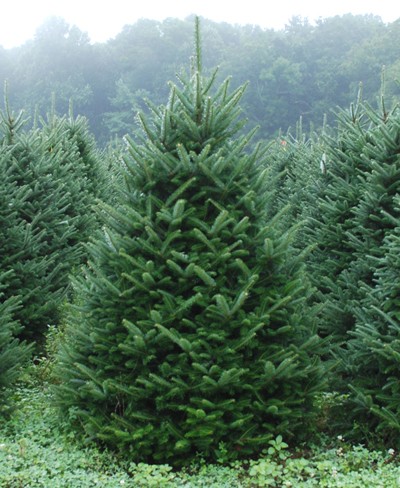 There are many types of Christmas trees to choose from and each has its own distinct features. If you’re looking for a tall and skinny tree, then a Balsam Fir is a great choice. A Douglas Fir, however, has more of a pyramid shape. Use this guide to find the perfect fit for your home.

Fir trees are one of more than 45 species of evergreen trees. Evergreen trees are a popular type of Christmas tree because they keep their leaves throughout the year. There are many types of fir trees and although they’re all similar, each type grows in a specific location and has a unique color and shape.

Noble Fir – The noble fir is a great type of Christmas tree because of its strong fragrance, which many people associate with the Christmas season. Its strong branches are also perfect for decorating. The noble fir grows in the Pacific Northwest and has a dark green color.

Douglas Fir – The Douglas fir, as mentioned above, has a grand pyramid shape that’s sure to make a statement in any home during Christmas. Growing predominantly in the Pacific Northwest, nearly half of all Christmas trees in the United States are Douglas firs. Douglas firs are highly desirable for their dark green color, seasonal smell and full body.

Balsam Fir – The balsam fir is one of the most fragrant Christmas trees. Unlike some of its family members, the balsam fir has more of a cone-like shape and grows from Northern Alberta down to Pennsylvania. If you’re looking for a Christmas tree that will fit in a tight corner, this tree will make the cut.

Grand Fir – The grand fir has a robust body and yellow-ish green needles. Similar to its family members, it gives off a strong scent. The grand fir grows from British Columbia, down through Montana and into Northern California. This type of Christmas tree is popular for families in the inland states. (Not available in 2020)

Canaan Fir – The Canaan fir is a hybrid between the balsam and Fraser fir trees, and it’s relatively new to the Christmas tree market. This type of Christmas tree has a rich green color, a medium fragrance and strong branches for decorating. You can see Canaan fir growing in the mountains of West Virginia.

Concolor Fir – Concolor fir has a large, round body and a blue-ish green hue to its needles. Many people refer to the concolor fir as a “white fir” because of its appearance. This type of Christmas tree is native to the western United States.

You’ll find all of these fabulous fir trees at Burger Farm this holiday season.  You may need to downsize your tree height this year however as trees over 9 feet tall are in very scarce supply.  Be sure to follow us on Facebook for all your fresh greens decorating needs.

← New for 2020 - Weekday Hayrides
IT'S BEGINNING TO LOOK A LOT LIKE CHRISTMAS! →